Friday Night Funkin'
The Background Freaks are background characters that appear during Week 6. They are seen spectating the sing-off during most of the week.

The Background Freaks are based on anime-esque female high school students. They are a group of female high schoolers consisting of multiples of the same two girls. They appear as young, light-skinned girls in blue Japanese school uniforms with short, pleated skirts, white leg warmers and black shoes. One has brown hair tied into a low ponytail with a magenta scrunchie, and the other has short black hair.

During the track Senpai, they are seen with happy expressions and heart-shaped eyes. They constantly bounce in enamored poses.

During the track Roses, they are now seen with shocked expressions and blank stares with a pair of blue lines coming from their left eye. Although they keep the same poses, they bounce slightly slower.

During the track Thorns, they are nowhere to be seen, leaving their statuses unknown. 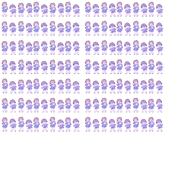 Background Freaks' old sprite sheet from a leaked prerelease build of the Week 6 update, which lacks their sprites for Roses.

The two girls sketched by Moawling.

Senpai and his fangirls drawn by Moawling.

Concept sketches of Senpai and a Background Freak.

All Background Freaks posing together during Senpai.

All Background Freaks posing together during Roses. 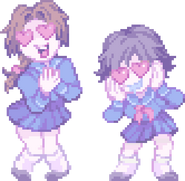 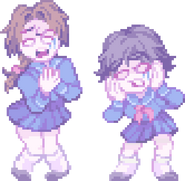