“Make the next one count!”
― Cassette Girl, SoftDon's art

Cassette Girl is an upcoming character for Friday Night Funkin'. She's been confirmed to also be selectable as a playable character in the future.

She was teased alongside Pico, Tankman and Hank J. Wimbleton on the 15th of November, 2020.

Cassette Girl is a young, light-skinned woman with long reels of magnetic tape all over her head that resemble black hair. She wears a loose-fitted, dark purple hoodie with light gray drawstrings, black shorts, a squarish, slightly-torn dark purple hat with a cassette player built into the front, and matching purple sneakers with white untied laces. She smokes a cigarette and holds a microphone in her left hand.

Cassette Girl is a character created by SoftDon in 2018 and first seen in concept art posted on Twitter.[3] Don later posted more artwork of her on Newgrounds. She was originally meant to be a mascot/alias for SoftDon's own music label, intended to be used when Don made music.[4] However, Don never created the label or music. Nevertheless, Cassette Girl became a popular character on Newgrounds, with art of her often being frontpaged.

Cassette Girl seems to be an easygoing and cheerful person who likes smoking cigarettes, singing and wearing crop tops.[5] She can also be sassy or serious at times.

Cassette Girl is a robot with audio-playing abilities, described by SoftDon as "a humanoid/android cassette player."[6] As shown in an early concept sketch, Cassette Girl can open the lower half of her face to reveal a cassette player. She also has various audio connectors and knobs on the back of her neck, shown in another concept sketch with cables plugged into the connectors. 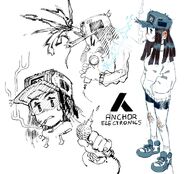 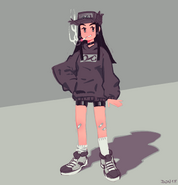 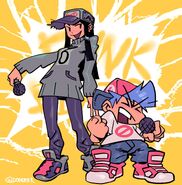 Artwork of Cassette Girl and Boyfriend by SoftDon.

Rough sketch of Cassette Girl and Boyfriend by SoftDon. 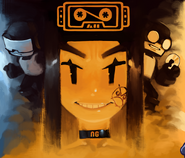