“Evilsk8r, the stylist of the game. All PhantomArcade designs pass through him to take every bit of art to the next level. Whether it's improving current designs, or coming up with their own, they've got no shortage of influence on the game's overall aesthetic. If it wasn't for their sense of style, the game just wouldn't be cool.”
― Friday Night Funkin' Kickstarter campaign description

evilsk8r, also known as block, is an American animator and artist. He is one of the artists for Friday Night Funkin'. He is mainly responsible for the game's artwork and works on character designs with PhantomArcade.

evilsk8r was one of the artists contacted by ninjamuffin99 for the game he wanted to make for Ludum Dare 47. ninjamuffin99 had been asking for help from other artists who were all currently too busy to help, but eventually managed to get evilsk8r on board with the project through recommendation. Unlike with Kawai Sprite and PhantomArcade, evilsk8r was the only person in the project that ninjamuffin99 had not interacted with before, but he was more than willing to work with new people. As the game's artist, he was tasked with making the game's art assets such as the game's logo, UI elements and backgrounds. With PhantomArcade, he also created its characters based on a "boyfriend and dad scenario," leading to the creation of Boyfriend, Girlfriend and Daddy Dearest. PhantomArcade first passes along his initial designs to evilsk8r who then adds his inputs onto it, then finally passes it back to PhantomArcade for him to settle on the final design before animating them. 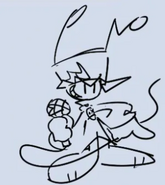 evilsk8r's character Buggy the Bug in one of the concept files depicting him as an opponent. 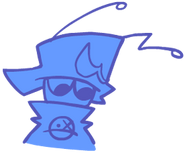 Buggy as he appears in the background of Week 5.

Art of a redesigned Week 1 concept by evilsk8r on Twitter. 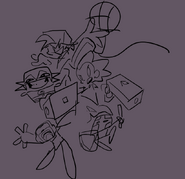 Pico Day doodle made by evilsk8r on Newgrounds. 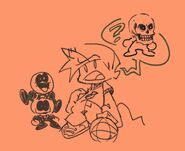 Sketch of Boyfriend and Skid and Pump by evilsk8r on Twitter. 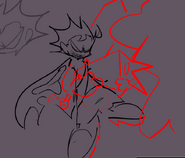 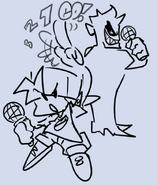 A sketch of Boyfriend and Daddy Dearest drawn by evilsk8r on Twitter. 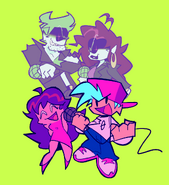 Sketch of Boyfriend, Girlfriend, Daddy Dearest, Mommy Mearest, Pico, and Skid and Pump (as well as Sora from Kingdom Hearts) made by evilsk8r in commemoration of the first anniversary of the game. 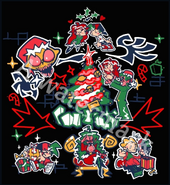 Artwork for a Christmas shirt made by evilsk8r.

Art of the Friday Night Funkin' developers from the FNF art booklet. evilsk8r is represented through his character Buggy the Bug.

Art of Pico made by evilsk8r for Pico Day 2017.
Español 日本語 Türkçe 中文
Community content is available under CC-BY-SA unless otherwise noted.
Advertisement