The album contains all the tracks from Weeks 6-7, their instrumentals, a menu theme and a remix. Two additional tracks are also included, those being Give a Lil Bit Back, a currently unused track, and Klaskii Romper, the cutscene music for the track Stress and the music for the game's Kickstarter campaign trailer.

Monster and Winter Horrorland along with their instrumentals, songs created by Bassetfilms from Weeks 2 and 5 respectively, appear on the album available on Spotify. 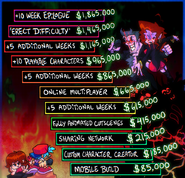 The stretch goal image on the Kickstarter campaign page, which served as the basis of the album artwork.