“That's how you do it!”
― Girlfriend, Friday Night Funkin'


Girlfriend is the deuteragonist of Friday Night Funkin', Boyfriend's partner, and the daughter of Daddy Dearest and Mommy Mearest. She is usually seen sitting on top of speakers, bopping her head to the tempo of the music, cheering Boyfriend on and keeping track of combos. While not necessarily an antagonist, she is the first opponent faced by Boyfriend where she teaches the player how to play the game with her only track, Tutorial.

Girlfriend is a young, light-skinned woman with long auburn hair; the shine on said hair resembles a skull. She wears a sleeveless red mini-dress and matching high heels. Her fingernails are painted red. She is almost always on a set of three speakers, sitting on the large middle one with her legs crossed.

During Week 4, her hair gets blown as a result of being on top of a moving car.

During Week 5, she wears a similar sleeveless red mini-dress with a fluffy white collar, red gloves with white cuffs, white thigh-high stockings with small red bows, and yellow bell earrings. The speakers she sits on are all wrapped in festive Christmas lights.

During Week 6, her regular appearance is rendered in a pixel art style.

During Ugh and Guns, she has her hands up as she is held at gunpoint by two Tankmen each on the smaller speakers next to her. During Stress, she is held up from her waist by Boyfriend.

Girlfriend is portrayed as a young, mysterious woman chilling on top of her speakers and vibing to the music. With a love for cherry soda and her boyfriend, Boyfriend, she seems to be calm and collected in almost any situation even in the face of death. Being a demon, she seemingly possesses a great deal of power, but she chooses to hide it. She is always seen with Boyfriend at her side, courtesy of true love as she genuinely loves him very much.

Like with Boyfriend, Girlfriend has been confirmed to not be the sharpest tool in the shed, to the point where her faith in Boyfriend is practically blind faith. However, she is still capable of making smart decisions and knows what to do when dealing with taxes and facing death. Girlfriend has also been described to be mean "in her own special way".

Girlfriend as she appears on the week selection menu.

All of Girlfriend's singing animations from Tutorial.

Girlfriend crying if you mess up a +10 combo. She also cries in a Week 7 cutscene after being insulted by Tankman.

Girlfriend getting scared by a lightning strike in Week 2.

Girlfriend revealing her demon powers, with Pico then leaping from the sky.

Ditto, but without the effects.

Girlfriend's idle animation on the start screen, with pink and blue outlines. 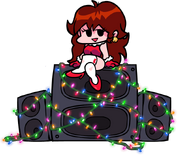 Girlfriend as she appears in Week 5. 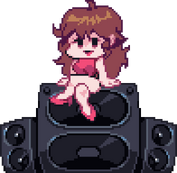 Girlfriend as she appears in Week 6.

Girlfriend as she appears in Week 7 during the first two songs.

Boyfriend catching Girlfriend in the third cutscene of Week 7.