Hank J. Wimbleton is an upcoming character for Friday Night Funkin'. He's been confirmed to also be selectable as a playable character in the future.

He was teased alongside Pico, Cassette Girl and Tankman on the 15th of November, 2020.

Hank is a gray-skinned humanoid with a black cross on his face and hands that float separately from his body. He wears a black coat, a black bandana on his head, another black bandana on his face, black goggles with red lenses, gray shoes and black fingerless gloves. Bandages cover a majority of their head beneath their head coverings, due to damage from the past. They hold a knife in one hand and an all-red microphone in the other.

Hank J. Wimbleton is the main protagonist of Madness Combat, a series of Flash animations started on the 25th of July, 2002 by Matt "Krinkels" Jolly. A cunning mercenary from the apocalyptic deserts of Nevada, he is wanted by the A.A.H.W, a weaponized organization dedicated to wiping them out and keeping them in the afterlife. He has to go against the hundreds of agents assigned to kill him for good.

The Madness series has a special Newgrounds holiday named "Madness Day," which occurs on the 22nd of September every year since 2007.

Hank is an uncaring murderer who takes pleasure in killing. They don't care for much other than causing the bloodshed of the people they hate. They have been shown to use any means necessary to kill their enemies.

Despite this, Hank isn't devoid of empathy or any other generic human traits. At one point, he got incredibly excited upon seeing a giant blender, which he then used to kill various grunts. He also protected Sanford by carrying him off the roof after realizing that the Auditor was going to explode once the latter indirectly absorbed Tricky. 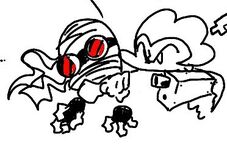 Sketch of Hank with Pico posted on PhantomArcade's Twitter. 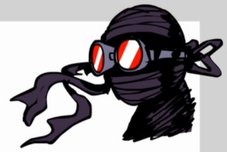 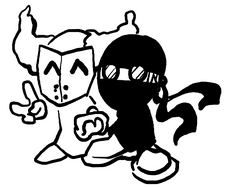 Hank and Tricky being best buds by PhantomArcade on Twitter.

Hank lurking in the shadows preparing to end Boyfriend's life with a knife.

Drawing of Hank in the rain by PhantomArcade.