Week 6, titled Hating Simulator ft. Moawling, is the sixth set of levels in Friday Night Funkin'. It was released on the 2nd of February, 2021.

The true location of this battle is inside of an old pixel-styled dating sim video game that Girlfriend used to play.

Week 6 takes place at "The School." This location is set at daytime on a large stone path leading towards a high school with a large clock and its own water tower. Petals from the cherry blossom trees constantly float down. Several girls with heart eyes in blue Japanese school uniforms watch the rap battle closely in the background in enamored poses.

In the second track, the location undergoes a slight tonal shift as the girls in the background now appear blank-eyed and with a shocked expression on their faces. They are also bouncing slower than before.

In the third track, the location undergoes a nightmarish shift as the sky and school grounds become enveloped in darkness, the cherry blossom trees appear dead and petalless and the spectating girls are now gone. The once pristine school and pathway now also seem broken, with shattered windows and chipped or missing tiles. The screen becomes wavy, causing everything in the background to appear slightly distorted.

Boyfriend and Girlfriend both have different appearances to fit the week's pixel art style. This style change also alters many other visual elements such as the text, arrows (as well as one of their colors) and the character icons.

The Game Over screen, music and related sound effects are changed to better fit the week's style as well. Boyfriend's skeleton retains the pixelated appearance, the sound effects are lower quality and the game over music is redone in the style of chiptune.

Senpai, along with pixelized versions of Boyfriend and Girlfriend.

Boyfriend as he appears in Week 6. 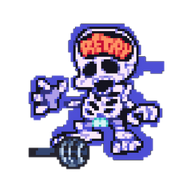 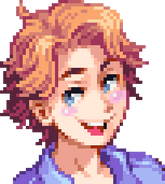 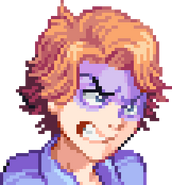 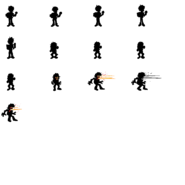 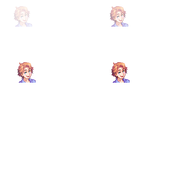 Senpai's portrait assets in Week 6 during his eponymous song. 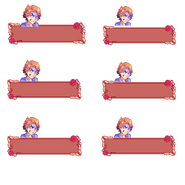 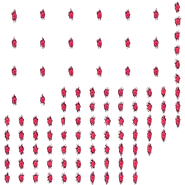 Spirit's portrait during the cutscene in Thorns. In-game, he covers a blackened silhouette of Senpai's headshot.

"Direct contact with real humans, after being trapped in here for so long..."

Gameplay of the first song, Senpai.

Gameplay of the second song, Roses.

Gameplay of the third song, Thorns.

Spirit busting out of Senpai's face during the cutscene for Thorns, leading to his death.

Ditto but without background.

Text box used in the cutscenes for Senpai and Roses.

Animation of the Background Freaks during Senpai.

The original appearance of this week's background with a different school design.

The sky. (Senpai and Roses)

The school. (Senpai and Roses)

Parts of the trees. (Senpai and Roses) 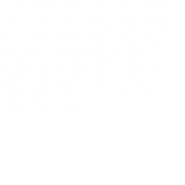 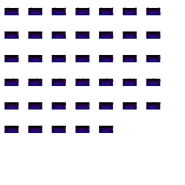 First part of the unfinished Week 6 beginning cutscene, featuring the video game console. This cutscene may appear in the full game.

Fourth part of the cutscene, featuring both Boyfriend and Girlfriend falling and a spiral effect representing their being transported into the game. 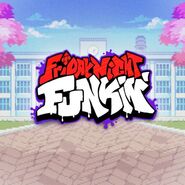