Varies (some dead, others alive)

Friday Night Funkin'
The Henchmen are background characters that appear during Week 4. Most of them are dancing in the background on a separate limousine, while another one of them drives the limo Mommy Mearest and Boyfriend stand on during their sing-off.

The Henchmen all appear alike with light pink skin, a flattop haircut with a pair of horns and a deviously large grin that reveals a blue tongue. They also dress the same in open black jackets with large pointed shoulder pads, black pants, black sneakers with white laces and a pair of sunglasses.

During the tracks Satin Panties and High, the ones standing on the limo all perform a synchronized dance.

During the track M.I.L.F, their usual dance is slightly altered to better fit the fast tempo of the track.

Henchmen dancing, but without shading.

One of the Henchmen driving the limo.

Headshot of a Henchmen by PhantomArcade. 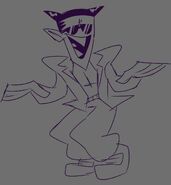 Henchmen in Spooky Month's style, made by Sr Pelo.

A currently unused animation showing several dancing Henchmen being brutally chopped up by a lamp post. 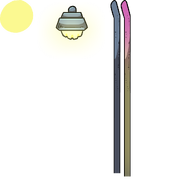 The currently unused lamp post assets that hits the Henchmen. 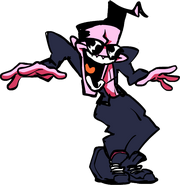 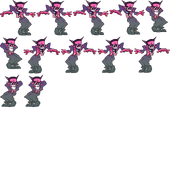 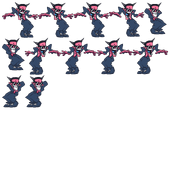 Henchmen's sprite sheet, but without shading. 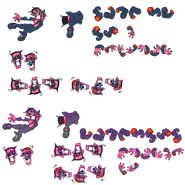 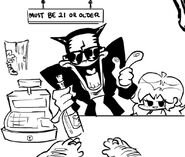 Sketch of Girlfriend and one of the Henchmen (with Boyfriend in the background) from PhantomArcade's Twitch stream.

Unfinished sketch of the Henchmen made by PhantomArcade on Twitter. 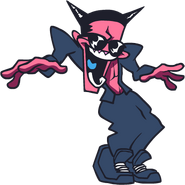 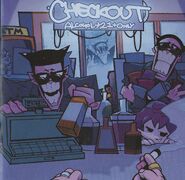 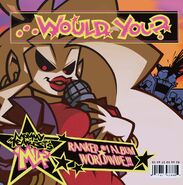 Artwork from the FNF volume 1 CD art booklet with one of the Henchmen getting a nosebleed by looking at Mommy Mearest.