“Kawaisprite, the kingpin himself. In 2011, Kawaisprite was charged with armed robbery. He was sentenced to 14 years. In prison, Kawaisprite found a dusty Akai MPC3000 in the shed of the yard. After stabbing a fellow inmate over whatever, he was sent to solitary confinement for 7 years, with nothing but the beat machine. The initial prototype of Friday Night Funkin' was released a week after Kawaisprite got out jail. The rest, is simply history.”
― Friday Night Funkin' Kickstarter campaign description

Isaac Garcia, better known online as Kawai Sprite, is an American musician. He is the main composer and sound designer for Friday Night Funkin'. He is responsible for almost every song and several voices and sound effects in the game.

Kawai Sprite was the first person to be contacted by ninjamuffin99 after coming up with the basic concept of the game he wanted to create for Ludum Dare 47. With his experience in music, he was tasked with creating tracks appropriate for a rhythm game. According to ninjamuffin99, he wanted it to go in an old-school direction, specifically noting PaRappa the Rapper and Gitaroo Man as examples for what he was looking for in the music that were to be added. Additionally, voices were unanimously decided to follow in the style of Vib-Ribbon, leading to the "boops and beeps" vocal style the game is known for. During the course of the game's creation, Kawai Sprite created the start screen theme, Bopeebo and Fresh, as well as providing the voices for Boyfriend and Daddy Dearest.

Kawai Sprite continues to produce most of the game's music, sounds and character vocals. However, not all tracks in the game nor all the voices were done by him. Two tracks were contributed by Bassetfilms: Monster, a Week 2 track, and Winter Horrorland, a Week 5 track. Other weeks in the game had their antagonists voiced by other people such as Sr Pelo for Skid and Pump, Bassetfilms for Monster, l0litsmonica for Mommy Mearest and JohnnyUtah for Tankman. 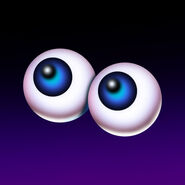 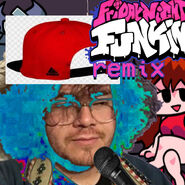 A photoshopped image of Kawai Sprite made to resemble Boyfriend. Used in the cover for Fresh (Boyfriend Remix).

Art of the Friday Night Funkin' developers from the FNF art booklet.