View source
Unused Content
This article is about unused/deleted content or a previous version of the game!
You can help the Friday Night Funkin' Wiki out by expanding it.

Lucky Boy was a character that appeared within the Friday Night Funkin' game files.

Lucky Boy is a living sock creature with black freckles and eyes. He wears a backward teal hat and has blue and red stripes on his body. He plays a red Gretsch Bo Diddley guitar. In all of his animations, yellow zigzags appear around him. 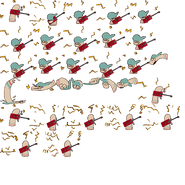 Animation of Lucky Boy made by Dylee Dee, which is the origin of part of the sprite sheet.

The tumble animation seen in FNF's source code and in the sprite sheet.