Mall Santa is a background character that appears during Week 5. He is one of the numerous spectators of the rap battle during most of the week.

Mall Santa is a stubby, old man with a long, white beard playing the role of a typical mall Santa. He wears a typical Santa suit with a black belt and golden buckle, white gloves, maroon shoes and a stocking cap. He is seen with a worried expression at all times while sweating profusely.

During the tracks Cocoa and Eggnog, he is seen standing next to Daddy Dearest and Mommy Mearest, constantly being held at gunpoint by the former.

During the track Winter Horrorland, much like everybody else that was spectating in the previous songs, he is nowhere to be seen.

Mall Santa held at gunpoint by Daddy Dearest in Week 5. 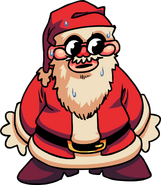