Mina (Korean: 미나), better known online as Moawling, Moawko or simply Moaw[2] (모어),[3] is a Korean-American freelance pixel artist, game developer, and educator. They have contributed to Friday Night Funkin' as an artist for Week 6, a week that was done entirely in pixel art.

In celebration of the Newgrounds holiday "Pixel Day," the Week 6 update for the game was announced to be done in pixel art by Moawling, a close friend of PhantomArcade that he reached out to for help on the game. Moawling has redone almost all of the necessary assets for Week 6 in pixel art such as the main characters, the antagonists, the background and some of the UI elements such as text, notes and character icons. Some additional pixel art help was provided by JohnnyUtah who helped in animating the final sprites. To commemorate their contributions, Moawling is directly credited on Week 6's title as a featured artist.

Full artwork of Senpai and his fangirls by Moawling on Newgrounds. 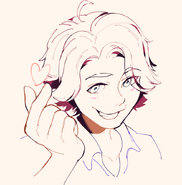 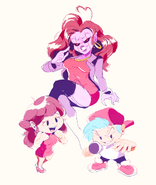 Mommy Mearest, Boyfriend and Girlfriend artwork made by Moawling on Newgrounds. 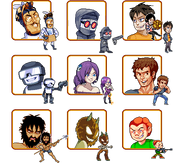 Pixel art of Tankman and Steve for Pixel Day, made by Moawling.

A simple little sketch of Senpai made by Moawling.

Senpai being Senpai, drawn by Moawling on PhantomArcade's Twitch stream. 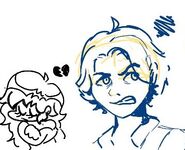 Girlfriend not having any of Senpai, much to the AI's vexation. Drawn by PhantomArcade and Moawling on a Twitch stream.

Doodle of Boyfriend with Moawling.