Mommy Mearest is the mother of Girlfriend and the wife of Daddy Dearest. She is the main antagonist of Week 4 and one of the antagonists during Week 5. Her tracks include Satin Panties, High and M.I.L.F, and shares the tracks Cocoa and Eggnog with Daddy Dearest.

Mommy Mearest has a demonic-looking appearance with purple skin, black eyes with red glowing pupils and long auburn hair with several pointed ends and a curved cowlick. She wears a form-fitting red dress underneath of a black jacket, black thigh-high heel boots, a black garter belt, golden hoop earrings, a golden necklace and a pair of golden bracelets on each wrist. She has dark red lipstick on and sharp red-painted fingernails. She clutches a microphone in her right hand but will sometimes hold it in her left while singing.

During Week 5, she wears a Santa Claus outfit with a plunging neckline, a black belt with a golden buckle, white fur-lined knee-high heel boots, and golden hoop earrings. She sits on Daddy Dearest's lap who is seated on Santa Claus' throne chair. She holds a microphone for both of them in her left hand with her pinky out while holding onto her husband's shoulder with her right hand.

Mommy Mearest facing off against Boyfriend. 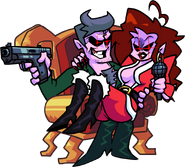