Check this page for the assets that are used in-game.

This is a list of old/unused assets for Friday Night Funkin'. These include unused art, tracks and sounds.

This track was apparently charted into the game by ninjamuffin99 as a joke. Though the level did not originally have music, it was discovered that the chart lined up with a song taken from a different game, R4: Ridge Racer Type 4. The track was Urban Fragments by Kohta Takahashi and performed by Kimara Lovelace, which served as the game's opening theme. The track can still be accessed via some file editing. Players must first download the song. After downloading it, go into the game's music files and find the file belonging to Tutorial labeled "Tutorial_Inst.ogg." Modify the name of this file before dragging and dropping the downloaded file into the same folder. The downloaded file will be named with the old file name, so it is important that the original file is renamed. Go into the game and load into any song in any difficulty. Once in, open the Debug Menu, click the song tab and change the song name to "Ridge" before pressing Reload JSON. (Use the shift key to capitalize the letters.) Once the Debug Menu reloads, change the song name to "Tutorial" and press Reload Audio. Click the enter key on the keyboard and the song should start playing.

This song is very short and broken, and no actual audio plays during it. The track was apparently supposed to be the song Break the Targets from Super Smash Bros. Melee. This song was found hidden in the game files, similarly to Ridge. According to ninjamuffin99, it was the first chart he ever did for the game.

See Test for more information on this track.

This song goes unused, and judging by the name, it was likely used for testing purposes. The track was found when the Week 5 update came out. This track was created by Kawai Sprite. Up until the release of Week 7, the vocal track for this song was completely silent. Since then, the song has been given a proper voice file as well as an actual chart, but still remains inaccessible by regular means.

The difference of this version is that Boyfriend's voice is smoother, an unused background music plays, the "Hey!" sound effect is gone from a part, and Daddy Dearest's voice is slightly different.

Girlfriend has unused voice lines titled "GF_1.ogg", "GF_2.ogg", "GF_3.ogg" and "GF_4.ogg". They sound like random beeping, much like the vocals Boyfriend makes. They were used for the cutscenes, but since the speech bubbles never go used, this can't be heard in the Tutorial. However, in the older versions, it was possible to access this with coding.

There are unused sounds titled "badnoise1.ogg", "badnoise2.ogg" and "badnoise3.ogg". They are most likely the original unedited versions of the current miss sounds.

"soundTest.ogg" is a single drum noise played on repeat for 16 seconds. It was now confirmed that it was a latency state. It was for a down arrow moving towards a line with soundTest.ogg playing. It was found in the source code.

"Lights_Shut_off.ogg" is the sound that played when the screen blacks out at the end of Eggnog in Story Mode. This sound can not be fully heard as the game just cuts straight to the "jumpscare" at the very start of Winter Horrorland. This was fixed after the Week 7 update. It is possible to hear the sound for a split second if the game lags enough, however it is very rare to hear.

"c_z" is a sound that is labeled "funny music :)" in the GitHub repository for the game and can be found in the art folder there. It is actually an SSTV (Slow Scan Television) signal, which consists of loud beep sounds. Decoding the signal reveals a slightly blurry photo of a notebook with handwriting that is somewhat scribbled: 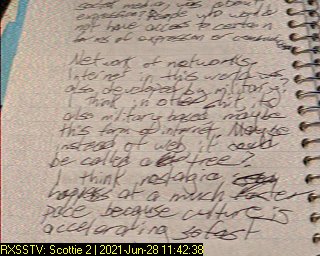 Check the prototype page for more information regarding the game's first ever build.

The Ludum Dare prototype of Friday Night Funkin' is the original build of the game that was submitted for Ludum Dare 47, a game jam event. It was released on the 5th of October, 2020, the last day to submit a game for the jam. The game can still be played on its Itch.io page.