“PhantomArcade is an animator. He leads the story, makes the characters, and animates them all for his arch rival Ninjamuffin to implement into the game. He uses Adobe Flash CS4.”
― Friday Night Funkin' Kickstarter campaign description

David Brown, better known online as PhantomArcade (formatted as Phantom Arcade on his YouTube channel), is the animator and one of the artists for Friday Night Funkin'. He is mainly responsible for the game's animation and working on character designs with evilsk8r. He also worked with Bassetfilms to create the character Monster.

PhantomArcade was one of the artists contacted by ninjamuffin99 for the game he wanted to make for Ludum Dare 47. ninjamuffin99 had been asking for help from other artists who were all currently too busy to help, but eventually got PhantomArcade on board for the project alongside another artist, evilsk8r. As both the game's animator and one of its artists, he was tasked with creating initial character designs for the game with evilsk8r. They created the game's characters based on a "boyfriend and dad scenario," which lead to the creation of Boyfriend, Girlfriend and Daddy Dearest. PhantomArcade first passes along his initial designs to evilsk8r who then adds his inputs onto it, then finally passes it back to PhantomArcade for him to settle on the final design before animating them.

PhantomArcade has also taken on the role of the game's writer. Even back during the game's creation for Ludum Dare 47, he initially wrote up the game's story. Since the game's release on Newgrounds, he has shared plenty of outside lore and details for characters and events within the game, particularly during his live streams on Twitch. An expansive story is currently being written that will tie everything together once the full game is complete. 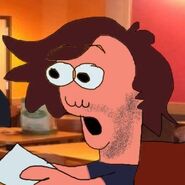