Were you looking for the character or the song?

Week 3, titled Pico, is the third set of levels in Friday Night Funkin'. It was released on the 11th of December, 2020.

Boyfriend faces off against Pico, the schizophrenic school savior.

Week 3 takes place on the "Newgrounds Office Roof." This location is set at night time on the rooftop of a building. Behind it is a subway railway with two red train station pillars that suspend overhead electric lines. Behind the railway are the outlines of various city buildings with windows that frequently change color.

Subway trains occasionally zoom by from right to left. Whenever this happens, Girlfriend's hair will be blown to the side, causing her to temporarily stop bopping her head to the tempo. She will resume once the subway cars finish passing by. This applies to all tracks. 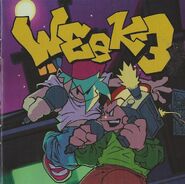 Artwork of this week from the FNF art booklet, featuring Boyfriend and Pico.
Español 日本語 Português do Brasil Русский 中文
Community content is available under CC-BY-SA unless otherwise noted.
Advertisement