Losers, weirdos, dumbs (by Roy)
Living piles of flesh (by Eyes/The Eyes of The Universe)
Spooky kids (in the game files)
Spooky boys (on Author Comments special thanks section on Newgrounds)[1]
"Wil" (by Susie to Pump; part of Pump's real name)[2][3]

“IT IS THE SPOOKY MONTH!”
― Skid and Pump, It's spooky month


Skid and Pump are the primary antagonists of Week 2. Their tracks include Spookeez and South.

They are the first guest characters introduced to Friday Night Funkin', the second being Pico and the third being Tankman.

Skid and Pump are a duo of small children in Halloween costumes. Skid wears a skeleton costume consisting of a black outfit with white lines and circles representing bones and a skull head mask with black markings around the mouth. Pump wears a pumpkin costume consisting of a black suit with a white shirt underneath, white gloves and a pumpkin head mask.

The pair work in tandem with Skid resting atop Pump's head. The two share a microphone, though Pump holds it in his left hand by default. They do the Spooky Dance whenever they are not singing.

Skid's appearance without his costume depicts him with long, straight black hair and a circular face with black eyes. Pump, on the other hand, has long, curly black hair, a long face, and black eyes as well.

Skid and Pump originate from the Spooky Month web series created by Sr Pelo, a series of annual Halloween-themed videos that started in October 2018. They are known for their love for the Spooky Month (regardless of what month it is) and their adventures in their hometown that lead to unintentional trouble and good-natured chaos, along with their famous dance move known as the "Spooky Dance."

Skid and Pump are rather childish and gullible, although Pump is more cautious. They love Halloween (which they call “Spooky Month”) so much that they wear their costumes year-round and constantly spread the word of it around. Their fun-having attitudes have risked them being kidnapped a couple of times and led to them encountering many shady people around town without a thought to their safety. Their highly accepting behavior persists in Friday Night Funkin' when a certain lemon-headed being tricks them for his gain.

Despite their battle over Girlfriend, Skid and Pump are portrayed as being friendly with Boyfriend. 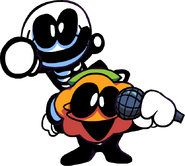