224 Notes | 78,400
Winter Horrorland is the third and final track of Week 5. It was composed and performed by Bassetfilms and released on the 20th of January, 2021. It appears in the album Monster.

The antagonist for this level is Monster.

Your skin is freezing,
here let me help you take it off.

Feasting with your friends,
what a perfect way to end,
all these lonely holidays.
(la la la la)

Gonna take a piece of your rabies,
and vivisect your mind.

Snowman smiling with your teeth,
fallen angels created with your meat.
(That pearly smile.)

Cut, in a thousand slices.
Bake you 'til, golden brown.
Stuff you with spices.
Serve to friends around.

Separate, you from your eyes.
Turn your girlfriend inside out,
and burn her fingernails.
(la la la la)

Soak your hands in freezing water.
Watching as the skin gets softer.
See your bones appear in dark
red snow.
Drop further below.

Gonna take a piece of your rabies,
and vivisect your mind.
Gonna take a peek inside your head,
and find the worm inside.

Cut, in a thousand slices.
Bake you 'til, golden brown.
Fill you with spices.
Serve to friends around.

Turn the heat on high and
we'll reduce your blood,
boil 'lil boyfriend,
with brandy and plums.

Winter Horrorland has a unique transition. Once the level is loaded, a loud noise is played while the camera remains focused on a severed head that looks similar to Girlfriend's on top of the now-gory Christmas tree for a few seconds before panning back down to Boyfriend. However, in Freeplay, this transition is absent, instead cutting straight to Monster and Boyfriend like any other track. 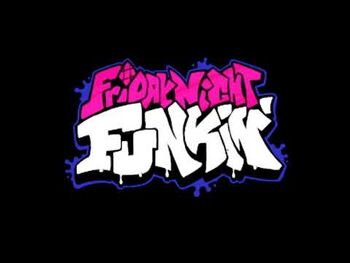